from South Asia PhoNographic Mornings by Each Morning of the World 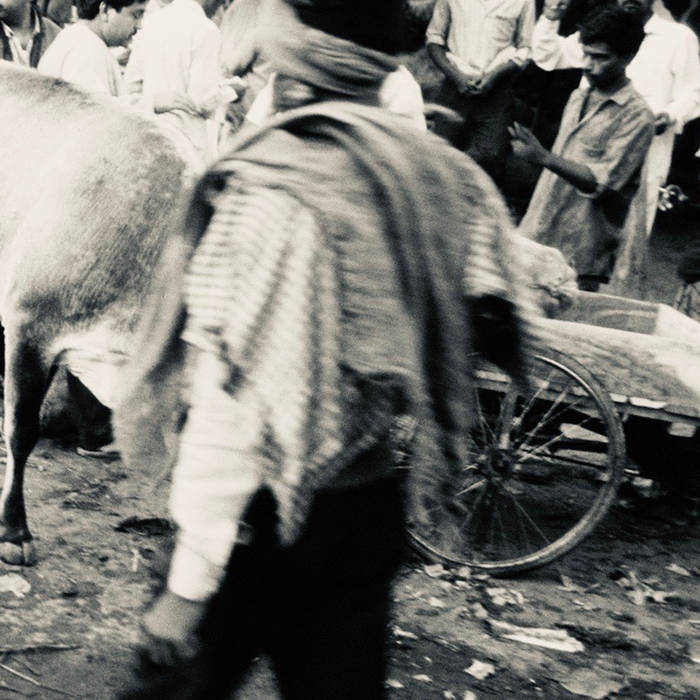 It’s October 31, 1992, about 6 am. It is still dark when a group of us arrives at the early morning vegetable market in Tilak Nagar, New Delhi. Participants of the Soundscape Workshop that I was conducting at Max Mueller Bhavan, had suggested that we visit this market. As we arrive in a taxi, the sounds of scooters, auto rickshaws, bicycles and a multitude of male voices welcome us. We walk towards the market and hear an increase in voice density. It is hard to make good recordings because people keep bumping into my microphone, which also provokes more raucousness in some of the voices! We spend quite a bit of time here, listening, recording, making sound level measurements, and afterwards discussing the experience over masala chai. Music playing over loudspeakers accompanies us back to our taxi, the door closes, momentary quiet.

Vegetables are sold at Tilak Nagar and eventually end up in the hands of the vendors who sell them in a neighbourhood such as Janakpuri a few hours later. One of our workshop participants lives here and from his balcony we not only have a panoramic view but also get a clear sonic impression of the neighbourhood. The soundscape is relatively quiet and spacious, especially in comparison to the dense market soundscape. We can hear children playing, the inevitable scooters passing, birds singing, dogs barking, all manner of human activity and the trumpet sound of the toy vendor. Our ears can trace the voices of the many morning vendors as they move through a labyrinth of streets. At the end of the piece a more recent, powerful vendor voice joins in, recorded with my iPhone as I was walking through Delhi’s Hauz Khas neighbourhood one morning in November of 2018. I had returned to India for the first time in 20 years. There have been many changes in India during this time, but vendors’ voices are still a daily presence in the Delhi soundscape.

Hildegard Westerkamp is a composer, radio artist and sound ecologist.
She presents soundscape workshops and lectures internationally, performs and writes.


Hildegard Westerkamp was born in Osnabrück, Germany in 1946 and emigrated to Canada in 1968. After completing her music studies at the University of British Columbia in the early seventies she joined the World Soundscape Project under the direction of R. Murray Schafer at Simon Fraser University (SFU). Her involvement with this project not only activated deep concerns about noise and the general state of the acoustic environment in her, but it also changed her ways of thinking about music, listening and soundmaking. Vancouver Co-operative Radio – founded during the same time - provided an invaluable opportunity to learn much about broadcasting, and ultimately enabled her to produce and host her weekly program Soundwalking in 1978/79.

One could say that her career in soundscape composition and acoustic ecology emerged from these two pivotal experiences and found support in the cultural and political vibrancy of Vancouver at that time. In addition, composers such as John Cage and Pauline Oliveros have had a significant influence on her work.

While completing her Master's Thesis in the 1980s, entitled Listening and Soundmaking - A Study of Music-as-Environment, she also taught acoustic communications courses until 1990 in the School of Communication at SFU together with colleague Barry Truax. Since then she has written numerous articles and texts addressing issues of the soundscape, acoustic ecology and listening, has travelled widely, giving lectures and conducting soundscape workshops internationally.

In 1993 she was instrumental in helping found the World Forum for Acoustic Ecology (www.wfae.net), an international network of affiliated organizations and individuals who share a common concern for the state of the world’s soundscapes. She was chief editor of its journal Soundscape between 2000 and 2012.

In 2003 Vancouver New Music (VNM) invited her to coordinate and lead public soundwalks as part of its yearly concert season. This in turn inspired the creation of The Vancouver Soundwalk Collective, whose members are continuing the work on a regular basis. For some years now she has mentored a variety of younger composers, sound designers, soundwalk leaders and people pursuing careers in soundscape studies and acoustic ecology.

Hildegard’s compositions have been performed and broadcast in many parts of the world. The majority of her compositional output deals with aspects of the acoustic environment: with urban, rural or wilderness soundscapes, with the voices of children, men and women, with noise or silence, music and media sounds, or with the sounds of different cultures, and so on. She has composed film soundtracks, sound documents for radio and has produced and hosted radio programs such as Soundwalking, and Musica Nova on Vancouver Co-operative Radio.

In a number of compositions she has combined her treatment of environmental sounds with the poetry of Canadian writer Norbert Ruebsaat and Sharon Thesen. She also has written her own texts for a series of performance pieces for spoken text and environmental soundtrack. In addition to her electroacoustic compositions, she has created pieces for specific "sites", such as the Harbour Symphony and école polytechnique. In pieces like The India Sound Journal she explores the deeper implications of transferring environmental sounds from another culture into the North American and European context of contemporary music, electroacoustic composition, and audio art. In 1998 she collaborated with her Indian colleagues Mona Madan, Savinder Anand, and Veena Sharma on a sound installation in New Delhi entitled Nada - an Experience in Sound, sponsored by the New Delhi Goethe Institut (Max Mueller Bhavan) and the Indira Ghandi National Centre for the Arts (IGNCA).

In 2000 she created together with photographer Florence Debeugny, At the Edge of Wilderness, a sound installation about ghost towns in British Columbia, commissioned by Vancouver's Western Front Society. And in her 8-channel composition Für Dich—For You, based on poetry by Rainer Maria Rilke and its translation by Norbert Ruebsaat, she explores the theme of love and connectedness with the sounds and languages of her German-Canadian existence.

More recently she involved her two grandsons in the creation of her work Once Upon a Time and collaborated with composer and recorder player Terri Hron on Beads of Time Sounding and with pianist Rachel Iwaasa on Klavierklang. The latter had its world premiere at ISCM’s World Music Days in Vancouver, November 2017. Her compositional work has been discussed in various articles, but most extensively in Andra McCartney's dissertation Sounding Places: Situated Conversations through the Soundscape Work of Hildegard Westerkamp, York University, Toronto, 1999. Her compositions draw attention to the act of listening itself, to the inner, hidden spaces of the environments we inhabit and to details both familiar and foreign in the acoustic environment.

Some of Westerkamp’s compositional work appears in US filmmaker Gus van Sant’s Elephant and Last Days. See Randolph Jordan's article: "The Work of Hildegard Westerkamp in the Films of Gus Van Sant". CDs of both soundtracks have been released in France by mk2 music. In 2016 she contributed to the sound design and composition in the film Koneline, Our Land Beautiful by Canadian filmmaker Nettie Wild.

Each Morning of the World Toulouse, France

Each Morning of the World recommends:

Bandcamp Daily  your guide to the world of Bandcamp